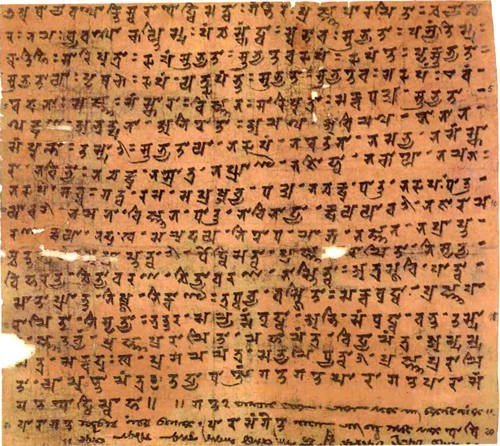 Holy writings passed down through oral tradition and later Sanskrit

“I will tell you briefly of that Goal which all the Vedas with one voice propound, which all the austerities speak of, and wishing for which people practice discipline: It is Om. Om, indeed, is the lower [Saguna] Brahman; this is, indeed, the higher [Nirguna] Brahman. Anyone who, meditating on Om, wishes either of the two [aspects], by him that is attained. This [Om] is the best means [of attainment and realization]; this means is the Higher and Lesser Brahman. Meditating on Om, one becomes worthy of worship in the world of Brahman” (Katha Upanishad 1.2.15-17)

Śruti (Devanagari श्रुति, “what is heard”) is a canon of Hindu sacred texts. They do not date to a particular period, but rather stretch across the entire history of Hinduism, beginning with the some of the earliest known Hindu texts, spanning into the modern period with the Upanishads.

Śruti has no author; rather, it is divine recording of the “cosmic sounds of truth”, heard by rishi. They are timeless teachings transmitted to rishis, or seers, directly by God thousands of years ago. Sruti is thus said to be apaurusheya, “impersonal,” or rather “suprahuman.”

Sruti consists essentially of the Vedas and the agama, preserved initially through oral tradition and eventually written down in Sanskrit. Among the many sacred books of the Hindus, these two bodies of knowledge are held in the highest esteem. For countless centuries shruti has been the basis of philosophical discussion, study and commentary, and this attention has given rise to countless schools of thought. It is also the subject of deep study and meditation, to realize the wisdom of the ancients within oneself.

Most mantras are drawn from sruti, used for rites of worship, both public and domestic, as well as personal prayer and japa. It is a remarkable tribute to Hindu culture that so much of sruti was preserved for thousands of years without alteration by means of oral instruction from guru to shishya, generation after generation. In the Veda tradition this was accomplished by requiring the student to learn each verse in eleven different ways, including backwards. Traditionally sruti is not read, but chanted according to extremely precise rules of grammar, pitch, intonation and rhythm. This brings forth its greatest power. In the sacred language of shruti, word and meaning are so closely aligned that hearing these holy scriptures properly chanted is magical in its effect upon the soul of the listener.

Text is available under the Creative Commons Attribution/Share-Alike License

“The leader is very meticulous and is disciplined. Such a person is definitely worth respecting and praising. All should therefore lead a balanced and disciplined life.”

“One who follows the path of virtuosity need not be worried about wealth as it comes to him naturally without making efforts.”

“When a person does not adhere to rules he fails to perform his duties properly but a disciplined person definitely achieves success. Only should therefore lead a disciplined life.”